Come on, everybody’s got one. It might not be leaping tall buildings in a single bound. You might not turn green and bulk up when you’re angry, you might not be able to shoot webs out of your wrists, but you’ve got something. Maybe you write the most kickass resumes. Maybe you cook a fantastic souffle. Maybe you’re the primo tax filer in your area.

We all have a thing. 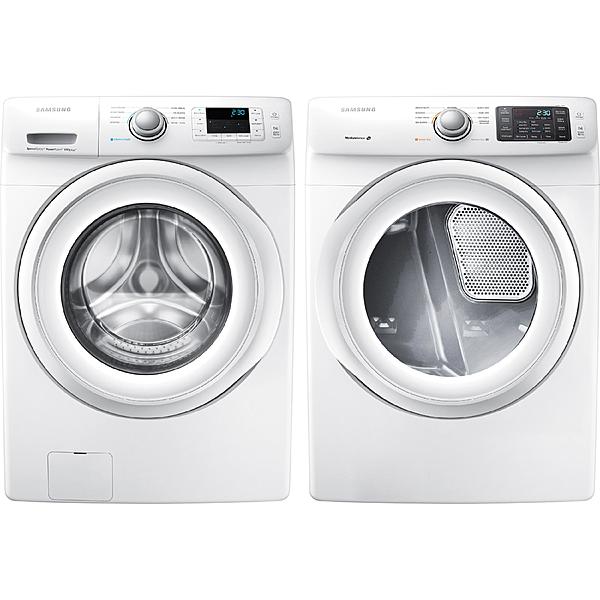 Now bear in mind, Clark Kent holds down a responsible job, does it well, works well as part of a team. He earns his place in that team and if you asked his friends, they’d say he’s an all-round good guy.

Are there any sparks? Any fireworks? Any ‘Hey, wow, that’s awesome!’ moments or qualities about Clark Kent? Not so much. But he’s good, solid, reliable at what he does.

It’s a 4.2 cubic feet washer – not by any means the biggest, but absolutely a decent size that will take a standard 8 pound load without any complaints. Samsung claims the WF42H5000AW can wash 2.8 laundry baskets full at a time, which in turn saves you three hours of laundry time a week. It’s always wise to be wary of manufacturers’ claims but the 4.2 cubic feet space of this front loader is spacious enough to get most normal laundry days done without adding any extra-special hassle to the process.

It has a stolid efficiency rating too. It’s not going to break any records or win any awards for efficiency, but that’s because there are two elements to the testing process for efficiency. In terms of the annual running costs of the machine, it’s a superstar. Power and waterwise, you’re looking at around $28 per year. Compare that to the running cost of a standard top-loader and you’ll find it’s less than half the cost. All good, right?

Mmm…half good. Because the running costs of the machine are only half the story. The rest of the story is how much water your laundry retains after an average cycle. More water retained means longer drying cycles, which adds to the power usage of an actual laundry load, and balances the equations of cost. Laundry coming out of the WF42H5000AW retained over 60% additional weight of water when tested.

That’s going to see you cranking up your dryer for longer, more or less balancing out the efficiency of the washer from astonishing to merely average. Of course, if you choose an astonishingly power-efficient dryer, that might push the efficiency credentials of the WF42H5000AW back up because it brings those superstar power-usage statistics to the party.

But as a standalone unit, on efficiency, the WF42H5000AW is just OK. It might not win any awards, but neither is it a power-chugging, water-guzzling Seventies truck of a thing. It does its job, and it offers you a reasonable, straightforward efficiency rating. And that’s all.

Pricewise, it’s a little better than a Clark Kent. It kind of gives you Clark Kent for a Jimmy Olsen salary. That’s a sweetener to the all-round solidly average nature of the beast. It might be an average performer in most areas, but you’re paying the sort of price you’d expect to pay for an entry-level rookie. There’s an optimistic way to look at that as the WF42H5000AW giving you more washer than your money’s actually worth.

The control panel on the WF42H5000AW is at least OK, giving you something that’s neither clunky nor too space age. It’s been designed for clarity and straightforwardness, to add ease rather than hassle to laundry day.

In terms of programs, it gives you a solid handful of your favorites, including Normal Wash, Quick Wash, Delicates, Active Wear, Perm Press, Bedding and a Rinse+Spin option. The panel adds a handful of extras that cut down the hassle even further. You can control the level of spin, the temperature, choose the level of soiling involved in the wash, add extra spin, extend the program or give the laundry an extra rinse.

There are programs which will help people with young families, like Sanitize programs, which are conspicuous by their absence here though. You can certainly get them, but you’ll be looking at significantly more initial outlay for a machine geared to delivering those levels of cleaning.

It does have a neat feature though, in that it’s ultra-quiet. Using what it calls VRT technology, the WF42H5000AW balances its load so that the spin of the drum is very unobtrusive. Since some of the more flashy, showy uber-washers sound like somebody strapped an elephant to a jet fighter, that’s a feature which takes the WF42H5000AW out of the ‘ordinary’ category.

So what the WF42H5000AW gives you is a highly competent but largely unremarkable washer. It has lots of the things you need if you don’t want to overthink your laundry though. Click, twist, press a button, boom – laundry’s on. And quiet. No hassle, no heartache, no degree in computer programming required to operate it.

There’s nothing overly complicated, nothing hidden, nothing especially bad about the WF42H5000AW – it does lots of things you want it to do. And with its ultra-quiet VRT technology, it does all that with its mufflers on, like a washer wrapped in cotton wool, so as not to disturb the household.

If there’s nothing especially bad about the WF42H5000AW, you might struggle to find the things that are especially good about it either. As we’ve said, it drives a line right through the middle ground – reasonable efficiency, not super-efficiency. Reasonably clear control panels, not either intuitively basic or charmingly complex.

With its voice lowered, it’s almost as though the WF42H5000AW is deliberately aiming to let you forget about it, to just do its job and not give you either any trouble or any cause for excitement. It seems designed to make laundry a ‘nothing’ experience, something that has to be done, but can be done as simply, quietly and unobtrusively as possible.

That’s a thing in itself. There will be people – arguably, lots of people – for whom that’s exactly the right way to think about laundry. Make it simple, make it quiet, make it effective in getting your clothes clean, so you can go on about your days and weeks doing more interesting things.

If that’s you, the very simplicity and plainness of the WF42H5000AW almost becomes its own superpower. It won’t ever dazzle you with the brilliance of the job it does. It won’t demand you stare at it long enough to make complex decisions between three-quarter wash with a double rinse and half-wash with a triple, plus one extra spin with sud-guard.

That’s not in any way its bag. If you love the complexity, the choice, the potential of some modern uber-washers, that’s valid too, but it means the WF42H5000AW is probably not your washer of choice.

Is it Right for You?

For those who just want a good, efficient enough washer though, the WF42H5000AW has plenty to offer in its reliable washing, handful and a half of straightforward programs and ultra-quiet presence. In fact, if that’s what you want, the WF42H5000AW may well be all the washer you need, especially given its relatively low price-point.

Superman spends most of his time being Clark Kent. But when there’s an extra special need he has to meet, he finds a phonebooth, and busts out his superpower.

Likewise, most of the time, the WF42H5000AW will do its quiet, unassuming thing, turning laundry into something you barely have to think about, and barely hear as it goes about its business.

But just occasionally, there’s a super-need. A need to turn the switch on the machine to the one setting we haven’t mentioned yet. The Heavy Duty cycle.

The Heavy Duty cycle is the WF42H5000AW’s phonebooth.

It’s where the quiet, unassuming washer with nothing to lift it above the crowd apart from a reasonable price, a quiet voice and a steady competence comes into its own.

The Heavy Duty cycle, in testing, saw the WF42H5000AW outperform most rivals, and certainly all rivals at its price point. While actual outside dirt was still a particularly stubborn stain for the WF42H5000AW to deal with, most food-based stains (especially with a high protein content) couldn’t withstand the might of this washer’s Heavy Duty cycle.

So, for the most part when you buy the WF42H5000AW you get an extra-quiet, competent washer without some of the bells, whistles and cycles that are popular in the 21st century. There’s no Steam Clean cycle here and no Sanitize cycle either (an especially notable omission from 2020 onward).

But the Heavy Duty cycle is unlike much else about the washer. It’s punchy and powerful and closer to perfect than those on similar machines. And the WF42H5000AW delivers all that for a price that you’d expect to pay for a significantly less competent or efficient washer.

It’s a machine that rarely shouts about its prowess, and for the most part only has ordinary prowess to mention. But when you need a heavy duty cleaning, it may not be a bird or a place, but the WF42H5000AW is a machine that will serve you well.