Oh, sorry – you find us getting all Shakespearean. Macbeth, Act 5, Scene 1. Lady Macbeth loses so much sleep over a persistent bloodstain she *Spoiler alert* kills herself.

Should have gone to Sears, poor thing. The Kenmore 25132 would probably have handled that bloodstain for her with very little fuss and everything would have turned out so differently.

Ah well. You live, you learn, you buy Kenmore…

Bottom line, if you’re in the market for a new washing machine, stain removal’s the name of your game, yes? If so, you can go one of two ways. You can get a fabulous modern front-loader you’re not afraid to introduce to all your friends. Or you can get something with less charm and grace than a football to the face, keep it down in the basement where nobody goes, and set it working.

Of course, if you’re going to buy a modern front-loader, you might as well pick up a flamethrower while you’re there and incinerate a huge stack of dollar bills. If you go the less aesthetic route, you can actually get yourself a canny deal. Say, a less pretty top-loader with a strong performance record on stain removal. Then you won’t be forced to burn money you’ve earned with your own blood, sweat and tears. In fact, you’ll be getting rid of the evidence of your blood, sweat and tears in a far more cost effective way. 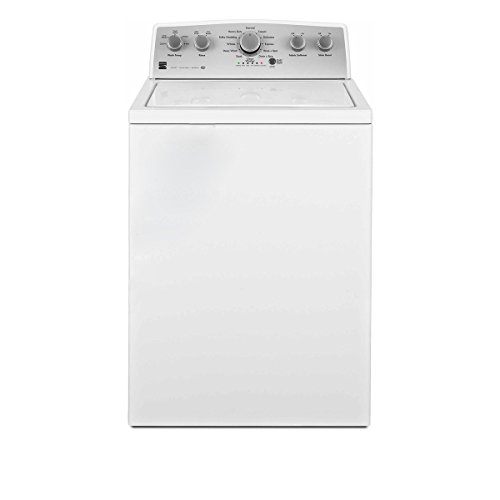 The Kenmore 25132 is not especially graceful, so of the two, its natural home is your basement or laundry room. But it is at least rather effective at getting those stubborn stains out. Job #1 for a washing machine, no?

At around $550, it’s on the cheaper end of the spectrum, so you’re winning on the front end of the deal.

What you get for that money is an object lesson in economics. Do you get a huge drum, capable of washing the whole family’s laundry for a month for your money?

No, you don’t. You get 4.3 cubic feet. It’s smaller than a modern front-loader, so you may well be washing in batches. On the other hand, 4.3 cubic feet is bigger than you might imagine – you’ll get a standard 8 pound load washed at a time in the Kenmore 25132 with absolutely no spatial drama. But the size is worth remembering when you pay out your relatively small up-front cost. The price is low for a handful of reasons. This is one of them.

Another is the simplistic nature of the dial arrangement. Some of the sexier new front-loaders look like they belong in the engine room of starships. The Kenmore 25132 looks like it could be used to aim missiles at the hapless people of Blargon 7 in a Fifties sci-fi adventure serial. It has the blocky, chunky look of the top-loader of the Rocket Men.

We mentioned the thing about keeping it in the basement or laundry room, yes?

It’s not by any means comparable with the aesthetically pleasing modern front-loaders in terms of sophisticated programs, detergent or softener allocation. Here you add your soap of choice at the start and then…well, that’s pretty much all she wrote.

Its five dials are pleasingly chunky, straightforward affairs, though they give you more than the handful of options you might expect. Some of your old favorites are here – the whites cycle, the delicates cycle, the heavy duty cycle for a hard night’s accidental wine-spillage. Or, we suppose, if you happen to be Lady Macbeth, a hard night’s regicide. Each to their own, it’s not for us to judge.

The simplicity and chunkiness of those control dials actually has quite a lot to recommend it though. We live in a world where programming modern, efficient washing machines is a skill that needs apps or whole booklets to master. So there’s something intensely pleasing about turning those dials to the right settings and clearly locking in the settings for each wash. It gives even the relative washing machine novice the sense of being clever, and vaguely scientific, without bamboozling them with micro-programs and safe-cracking dial-clicks.

The more serious side of the equation between the Kenmore 25132 and the more modern front-loaders has nothing to do with the Kenmore’s looks though.

The more serious side is its water and power consumption. 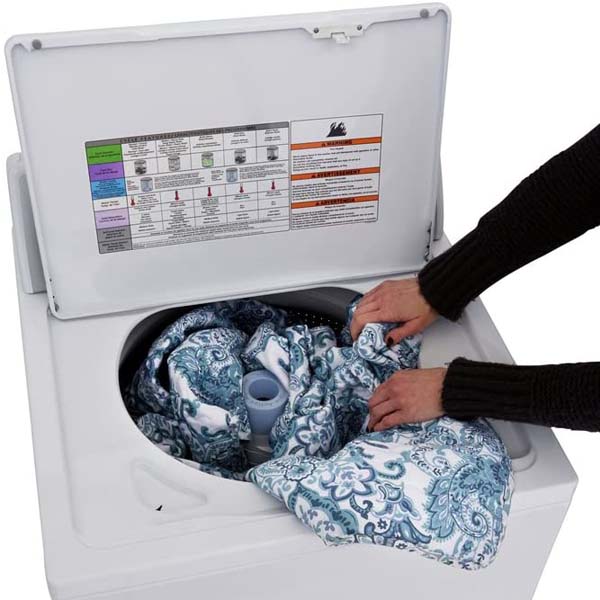 That’s no joke. Besides the planet-pressurizing point of using more water and power than should be necessary, there’s hard economic fact. Roughly speaking, you’ll spend around $55 a year on the water and power to let the Kenmore 25132 do its stain-removing thing.

That might not sound too bad overall. But firstly, compared to the efficient, more advanced front-loaders of today, it feels like it’s just won a chilli-eating contest and needs to rinse out its mouth. And secondly, if the machine lasts you ten years, that front-end cost that seemed so attractive will have doubled over the course of its active life.

That’s a thing to consider strongly before you buy the Kenmore 25132. How much of a deal are you actually getting for its stain removal sorcery?

Let’s take a look at that sorcery itself for a moment. Is it reason enough to make you choose the Kenmore?

Firstly, there’s one good thing inside the drum of the Kenmore 25132. It’s got an impeller at the base of its drum, rather than the authentically retro agitator. The agitator would have taken up some of the in-drum space, so the impeller means you have technically more space to fill with laundry per load. More space equals positive. We like more space.

Stain removal – a measure of how clean the machine gets your clothes - is the core skill on which the Kenmore 25132 hangs its presence in your life and basement. Testing is done by placing specifically stained strips of cloth into an ordinary load alongside other laundry. Once the cycle is complete, the degree of stain removal can be measured by a photospectrometer.

When tested, it turned out that the 25132 was excellent at removing blood and cocoa stains across all its cycles. Seriously, would have been useful for Lady Macbeth…

Apart from the slightly unusually-linked stains of blood and cocoa, it also scored well in terms of removing sweat and oil stains, thanks to its heavy water-thirst. The more water you use, the hotter it is, the longer it has to work on stubborn stains, the better the result you’re likely to get.

Certainly with the Kenmore 25132, the hottest possible whites cycle with a couple of extra rinses gave the best stain-shredding results. You’ll pay for hardcore stain removal in water and power though – the hot white wash takes a full hour and a half to get done. The heavy duty cycle took second place in the stain removal challenge, while the normal cycle came third – though taking only an hour.

Let there be no question then – the Kenmore 25132 is a solidly performing stain remover.

It’s less impressive when it comes to protecting laundry from wear and tear. Perhaps oddly, given that it uses an impeller rather than an agitator, it scored only middle-of-the-pack results in protecting your clothes from fraying fabrics during its wash cycles. The point of which is that it’s not especially bad at protecting from fraying, but whereas its stain removal is impressive, its fray-protection qualities are not exceptional.

Time-wise, you’ll struggle to get good results out of the Kenmore 25132 in under an hour, so it’s not your best option if you want quick wash and dry capabilities. The longer cycles are more effective, but only if you have the time. There’s a Stain Boost option if you have extra special stains to get rid of (‘Paging Lady M…’), but that option is not especially high-tech. It simply extends the length of the cycle. Again, more water, more time and more agitation equals a higher likelihood of getting more of the stain out. That’s not so much a ‘boost’ as it is a ‘patience.’ Rocket science, this is not.

Bottom line, the Kenmore 25132 is cheap in terms of its up-front cost, though its operational costs are heavy and its thirst for water an issue when it comes to your green credentials.

It’s a solid workhorse for getting your clothes clean and removing stains, and its design aesthetic, while not the most up-to-date, has a certain chunky cheerfulness about it. It will appeal to those who like the classics in both design and performance.

The options for subtlety and sophistication are few and relatively far between with the Kenmore 25132 though. That might well be an issue for those who prefer a more thoroughly 21st century clothes washing experience. Ultimately, the question with the Kenmore 25132 is whether it’s special enough or good enough to deserve a place in your home.

That will ultimately depend on whether it does enough of what you want a washing machine to do in the 21st century. If you’re in favor of the retro look, the simple dials, and the impressive stain removal, it may well have all you need – in which case, why pay more?

If you need more programs, regularly have a lot of laundry to do, or want to limit the amount of water you use, maybe shop around for a modern front-loader.