You remember the story of The Ugly Duckling, right?

Even if you never had the original story by Hans Christian Andersen read to you as a child, you might know the Disney song of the story, or at least be familiar with the idea.

Duckling. In a clutch of other ducklings. Looks odd, looks out of place, gets relentlessly bullied and mocked, and eventually waddles away to be alone. Time passes. Duckling-puberty hits. Boom! Duckling discovers he’s not an ugly duckling, but a beautiful swan. Moral? Live the truth of your life and you’ll find the beauty, rather than trying to live a life according to the rules of others, and allowing them the power of judgement over you.

What’s that got to do with the Kenmore 22353 washing machine? We’re glad you asked – it shows a lively mind and an inquiring spirit. 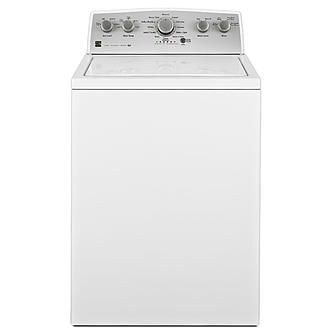 The Kenmore 22353 is not, by the standards of slick modern washing machines, a thing of great aesthetic beauty.

There’s no avoiding the fact that it looks like a big metal sugar cube, or the kind of prop that might just have made it into a black and white science fiction B-movie from the Fifties.

It has some dials on it, but they’re functional, utilitarian, even a touch Soviet in their simplicity. There are only a handful of flashing lights, no touchscreen displays, no visible enticements to stop and consider the Kenmore 22353 as your next top-loading washing machine of choice.

While there’s no disguising the shortcomings of the look of the Kenmore 22353, could it be that under the ugly duckling exterior, there’s a magnificent swan of a washing machine, if only you see it with a different mindset?

So where does its fight for swanhood begin?

Well, if we’re being honest (and let’s, it upsets the other reviewers), the swanhood of the Kenmore 22353 begins in your wallet. Because if you want a machine with flashing lights and touchscreen displays and all that fancy hullabaloo, that’s going to cost you. In fact, you can bet many of your bottom dollars, manufacturers are going to find ways to charge you for each and every light and doodad. Every time they can point at something as adding convenience, or choice, or aesthetic coolness to their washing machines, there’s an audible ker-ching sound of dollars being added to the price. 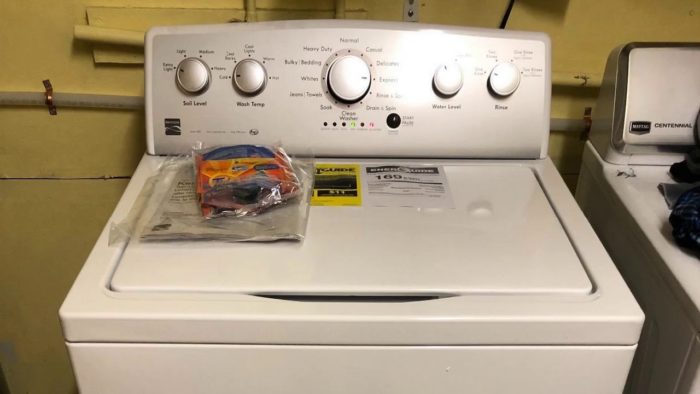 That’s the kind of person who takes the Kenmore 22353 home.

Because underneath its unlovely exterior, there’s actually the heart of a faithful family pet in the Kenmore top-loader.

With an in-drum agitator, the capacity of the Kenmore 22353 is less than it would otherwise be. That said, it still manages a decent 4.2 cubic feet of internal space. What does that mean? Well, if you’re a new parent with an endless parade of spit-up, throw-up and digestive explosions to deal with, you should move along and get a bigger, more hardcore unit. For single people and/or the childless though, 4.2 cubic feet is bigger and more useful than you might imagine. Large loads? No problem. Comforters? Fine. Even body pillows can get a good clean in the Kenmore 22353. So while size might matter, it’s not as important as you might think. The Kenmore 22353 looks small, but it’s got some mightiness in its work ethic.

Let’s talk about the agitator for a moment. It takes up precious space in the drum, and it moves the laundry around to help aid the cleaning process. Is that not inefficient in this day and age?

That depends on your way of looking at things. Is it less all-singing and all-dancing than modern app-controlled machines with auto-detergent dispensers and softener alarm cycles and so on? Absolutely.

On the other hand, there’s a gentleness to the agitator that doesn’t pound your clothes. That brings a noise reduction compared to the jet-engine uberwashers of the modern era. And yet when it comes to stain removal, the Kenmore 22353 scores highly. Surprisingly highly for those who don’t believe an agitator-based top-loader can deliver the modern levels of cleanliness you demand.

So let’s put to bed the notion that the agitator speed in the Kenmore 22353 means it can’t deliver on your cleaning needs.

What’s at least as much, research has shown that the Kenmore 22353 is kinder on your clothes than many more technologically-heavy machines. On a measure of attached, frayed threads after washing, it scored better than more powerful machines by GE, and indeed other, more technologically-loaded Kenmore machines too. It actually takes better care of your clothes than some other tech-heavy machines.

If that surprises you, stop right there. While we’ve made a lot of the simplicity of the Kenmore 22353, it would be a mistake to write off its capabilities and options.

You can actually choose between 12 cycles on the Kenmore, including cycles for express washing, for jeans, and for casuals. Unusually for a top-loader, you even get a soak option here.

Want some green credentials? You can use a deep fill option for more stubborn cleaning, but the Kenmore 22353 also lets you use lower water levels when, for instance, you don’t have a full load to wash. And while the look of the Kenmore is perhaps old-fashioned, you do get clear indicator lights to guide you through the cycle.

There are also several temperature options in the Kenmore – it might look like it came from the Cold War, but it was built in the 21st century, so it comes with some 21st conveniences.

So the Kenmore’s no slouch in terms of what it can actually do. But whereas uberwashers have the look of the drive units of starships, there’s a pleasingly retro vibe about the agitated top-loader style of the Kenmore 22353.

Or you can think of them as retro.

Whichever way you think about them, it’s undeniable that there’s a simplicity to them that flies in the face of the multi-program mystic runes of the more cutting-edge washers. This temp, this time, this water level, this program, see ya later. Job done.

That will come as an enormous relief to many people jaded by the ever-increasing complexity of the programs needed to get even simple things done in a modern machine. Sometimes, getting modern washing machines to do what you want is like trying to program a Stargate.

If you’ve ever spent a half hour turning dials, pressing buttons and weeping, begging your machine to “Just wash the thing!”, the Kenmore 22353 might appeal to you.

Who said there’s no virtue in simplicity? Besides, if you think of the agitator and the top-loading and the simple, chunky dials as retro, they begin to appeal on a whole new level.

As the world gets hotter and we all try to do our bit to use less energy, less plastic and fewer harsh chemicals, our ugly Kenmore duckling winks its eye. An agitator-based top-loading washing machine that works well to remove stains and clean your clothes? Check. One that does it without subjecting your clothes to as much machine wear and tear as others, and so ensures they last you longer? Double check.

One that does both of those things in a machine with a chunky retro aesthetic?

You might have to squint to see it from here, but stranger things have happened than the Kenmore 22353 and its like starting new appliance trends.

That’s the thing with the Kenmore. Its looks are against it, but really only because we’re trained to see it as old-fashioned and clunky in comparison to newer, sleeker models.

Like the ugly duckling, you need to shift your focus from comparing it to everything around it to letting it stand alone as itself. Do that and you’ll see:

There’s little about the Kenmore 22353 that’s fancy. You might not immediately think of inviting it to prom.

But it’s a workhorse that actually delivers a lot of cleaning power, and does it simply, reliably and gently, week in, week out. The Kenmore 22353 is a retro swan, just waiting for you to notice its impressive qualities.