If you like your home brands and you find yourself in need of a new washing machine, it stands to reason that you want the lowdown on what kind of washing machines GE has to offer.  So it’s a good job we’re here to inform you.

In this article we will talk a little bit about GE in general, then we will look at all their different strengths and weaknesses, before reaching a final conclusion.  We promise you’ll soon feel very well informed.

But before we get into the nitty gritty, here’s a quick rundown of how we’ve scored them in a number of different factors.  This should give you a good at-a-glance overview. 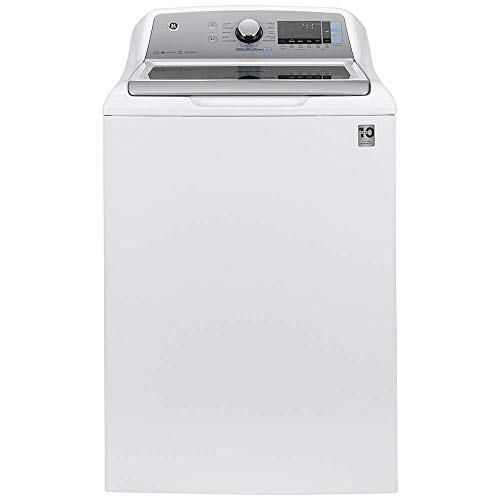 GE, formerly known as General Electric, and now known as GE Appliances, has a long and grand history.  They have been around for over a staggering 125 years.

And as you can imagine, they’ve been responsible for a lot of home appliance innovation over that time.  They produce quite a range of different appliances for the home but it was 1947 that they won the spotlight for their washing machines, with the first ever top loading automatic model.

And despite the ups and downs they’ve seen since, such as fire in 2015 and a lawsuit blocking a trade deal later that same year, they still see quite the market share.

Currently they are headquartered in Louisville, Kentucky, but their reach is global, and they’re just as big a household name in the UK as they are in the good old USA. 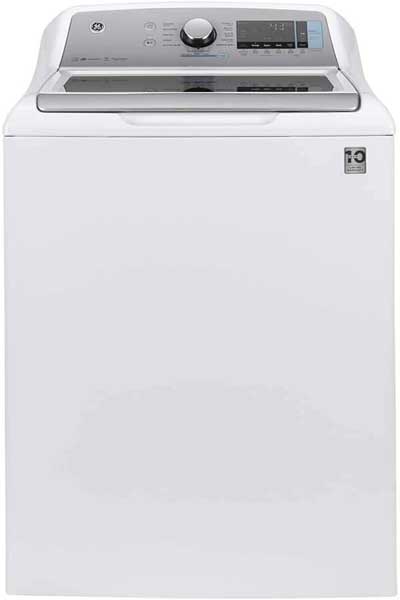 GE washing machines are ones you can rely on.  If they weren’t they wouldn’t get to enjoy the status they have now.  But now let’s put a beady eye on the details and features.

One of the things many people look for in a washing machine is a good load capacity.  A family of four for instance will need frequent use of the machine, stacking it up with clothes, towels and bedding very regularly.

GE washers are very good in this regard.  Most of them have a load capacity in excess of 4 cubic feet.  That’s big enough to fit an entire king size comforter.

GE machines offer what it refers to as SteamAssist technology.  Now this is a great little feature, but sadly only tends to be found in the higher end machines.

What this SteamAssist technology does, is to lift even deep stains from fabrics, whether it be from grass, or from greasy food and so on.  It’s an especially popular feature with families who use reusable diapers (as you can imagine!).

But that’s not all, this SteamAssist technology also helps to reduce wrinkles in the clothes, which is great when it comes to folding and ironing, and it helps to remove strong odors too.

Again, this is a feature mainly seen in the higher end models.

Basically, there’s a special area where you can place a whole bottle’s worth of detergent into, and the machine uses SmartDispense technology to only dispense the amount of detergent and fabric softener necessary to wash the amount of laundry placed inside at any one time (based on the weight).

Smart Cycles however is not just limited to the higher end models.

The machines have special sensors which automatically calculate the size of the laundry load, and adjust the temperature and the amount of water accordingly.  This way, it’s better for both the environment, as you save water, and also better for your electricity bill, since you’ll need less power to heat up the water.

This makes GE washing machines much more cost efficient in the long run than any counterparts who don’t offer a similar sort of feature.

Now, this is the important bit.  You can count on GE washing machines to do what’s expected of them and get your clothes clean.

Beyond any general mixed item cleaning, the machine can also handle a lot more than just your regular cotton and polyester blend clothes, and you may not ever need to take your more expensive clothes to a dry cleaners again.

In terms of getting rid of stains, in addition to the SteamAssist technology we mentioned earlier, some models also offer a Stain Inspector system which can treat over 40 common stain types.  So handy when you’ve got messy toddlers to worry about!

Many GE appliances, including many of their washing machines, have earned the Energy Star Label, meaning that they provide the economic benefit of efficient energy use without having to make any sacrifices with regards to their products’ performance or features.

In order to earn the label, Energy Star, the products have to be third-party certified based on testing in EPA recognized laboratories.

Energy star certification is a sign of a product that will not only save the customer money on their utility bills, but also that will help to protect the climate through superior energy efficiency.

Now, this is the latest of GE’s innovations that we made mention of earlier.

Basically, Wifi technology is built into some of the newer appliances, allowing them to communicate with the SmartHQ app on your smartphone or tablet.

This way you can do things like start cycles remotely, monitor  cycle status and time remaining, and receive an alert when a cycle has finished.

The higher a machine’s spin speed, the quicker clothes become to wash or dry.  However even amongst the higher end models, GE washing machines only seem to reach up to 1,100 RPM at the most, whereas other brands sometimes reach and even exceed spin speeds of 1,300 RPM.

We think this is probably due to GE’s vision of offering appliances that are generally better for the environment.  So how this sits with you, basically comes down to you.  You may feel the lower RPM is totally justified or you may prefer to have clothes ready ASAP regardless of what effect it might have on the environment.

There’s a wide variety of washing machines produced by GE, and they’re not all created equal.  And whilst the lower priced models do have a lot of functionality with them, you don’t get the same stain removal power with them than you’d get with their higher end models.

For a machine that has all of the great features that GE is known for, you often have to part with more money than strictly necessary.  For example, many of the washing machines in retailer best seller lists today cost over $1000.

And that leads us onto our next section.  We have identified some really good GE washing machines available at a far more reasonable price, that also have a good combination of features.

This washing machine may not have quite as much going for it as the more expensive models, but we would argue that it has everything that you could need.

Notably, it’s one of GE’s Energy Star certified machines that we made reference to earlier.

It has a very large load capacity, coming in at 5.2 cubic feet, which is more than enough for a medium sized or possibly a larger sized household.

It’s very straightforward to use.  And it has 10 different wash cycles for different loads of clothes, including colors, whites, jeans, towels, delicates and so on.

It also has 5 different wash options, and a power prewash, which is great for lifting more difficult stains, before letting the clothes go in for a normal wash.

There’s also versatility in terms of energy and temperature, with 6 different wash temperatures to choose from, which in turn affects how much energy is used and therefore the utility bill cost and the effect on the climate.

And it features the SmartDispense technology that we mentioned earlier!

GE washing machines certainly have a lot to offer in terms of special features, convenience and stain removal.  They’re also notably better for the environment than many of their competitors too.  And they certainly deserve their place in the retailers’ various best seller lists.

But we can certainly see why their expensive price point can be considerably off putting, which is why we’ve shown you some of the best value GE washing machines around.  Worth a look.