When it comes to rolling out new ovens, manufacturers tend to follow one of two schools of thought.

School #1 – Everything But The Kitchen Sink

You know what this school of oven looks like. It looks like the bridge of a jet plane, or a nuclear submarine, or Mission Control at NASA. Buttons, dials, lights, screens, alarms that go off for reasons you’re not sure of, but of which you’re just enough aware to be worried. Ovens that look like they have enough modes and compartments and zones and heat settings and auto-pilots and apps to take us to Mars.

Go ahead…try to cook a chicken on one of those. We dare you.

Then there’s the opposite school of thought. The oven so sleek and sexy and minimalist it looks like it’s an art installation. No buttons, no knobs, no visible means of entry. You could spend half an hour pressing randomly on various areas, like Indiana Jones trying to get into the Temple of Prime Rib, and still not work it out.

There’s probably an app for that one too, but it’s too discreet to download. It probably uses heat measurements from 300 years in the future and needs you to learn Klingon to discover its true potential. But you’ll never do that because it tells you nothing but looks so very pretty.

There is technically a third school of thought, where your oven is cast iron, stubborn, and retro as Abraham Lincoln’s beard. It weighs half a ton, has secret compartments to make jerky and probably heats your house too. But it has no visible controls, so you have to regulate your temperature with extra wood and an occasional prayer. 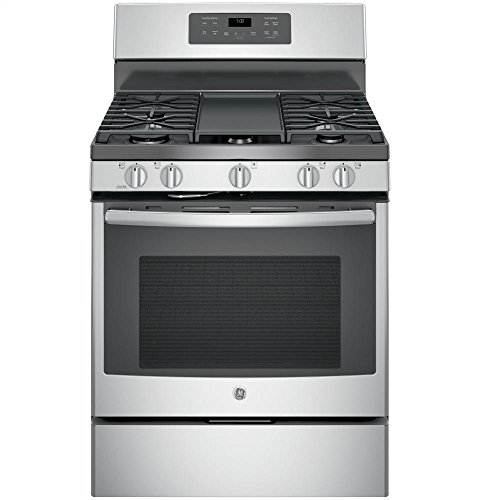 It’s not really until you see a machine like the GE JGB700SEJSS that you really appreciate the middle way you’ve been missing. Everything about it seems geared towards provoking that sense of relief and invitation. That sense that you can do this.

It costs $1,000. That’s not cheap, but it’s not in the same league as either variety of uber-oven. It lets you feel like you’re paying enough for quality, but not being taken for a ride. It has a sturdiness to it, but it’s not like you’ve parked a Greyhound bus in your kitchen. It has a steel and slate look, but a facial simplicity. Oven. Burners. Dials. OK, that all makes an instinctive sort of sense. The dials are of a size that invites you to use them, and the face is very much uncluttered. One dial does this, the other, that. It promotes accessibility by less confident cooks with this simple, inviting face.

There’s no anxiety approaching the GE JGB700SEJSS. In a sense, it’s almost like GE took a kindergarten drawing of an oven, and rendered it in three dimensions, specifically to let people engage with their oven. It’s not pretending to be a professional kitchen unit. It belongs at home, where you’re cooking good food, reasonably simply.

But if its face is engaging, it doesn’t mean that the results you can get from the GE JGB700SEJSS are simple or basic.

Cooks? People who want to cook more than they do right now?

Step away from the madness.

The point about all these ovens is to have a concept. A theme. And to include lots of things which on paper allow the manufacturers to feel justified in charging very large numbers of dollars.

GE – a company by no means immune to throwing an extra sackful of knobs onto its ovens – has a new old concept for its JGB700SEJSS oven.

It gives you a five-burner cooktop: enough to multitask, not enough to get flustered or frazzled. The burners are self-igniting, sturdy and reliable, taking the smallest elements of hassle out of the process of using them.

Four of the burners are standard pan-heaters, with cast iron grates over top. Then, to open up the options of your cooktop-space, there’s a central, oval burner which lets you griddle food right alongside, at 1,200 BTUs. There’s little about this that’s rocket science, for the very simple reason that very few people are rocket scientists. More to the point, nobody really wants to be a rocket scientist while making breakfast, even the people who are rocket scientists in their day-to-day life. Simple heat sources, dedicated to helping make your cooking easier but delivering solid, reliable results. That’s how you break down the walls of ‘cuisine’ and get people cooking more.

Bacon and eggs, anyone?

Again, while it’s never going to send you to the moon, the key to the appeal of the GE JGB700SEJSS is accessibility and usefulness. It balances just enough functionality with the ability to deliver tasty results without reading a manual the size of War and Peace.

The griddle option means you’re not struggling over breakfast. It allows you to consider making cooked breakfast foods that other more complex ovens would make you scared to attempt. Breakfast is reputedly the most important meal of the day. Send yourself or your family off into the day with hot food, more protein and less sugar than the likes of most breakfast cereals can offer. We’re not claiming the GE JGB700SEJSS can magically make you eat more healthily – and it’s not claiming that either. But having an easy, accessible option to make hot breakfasts puts those nutritious breakfasts within your grasp without adding to the stress of any busy morning.

The four main burners again deliver that middle way – they’re not enough to cook for an army, and so come Thanksgiving, you might need a strategic burner-use time plan. But you don’t live every day like it’s Thanksgiving – which in itself is something to be thankful for. Four burners is enough for most of your needs, most days of the year. 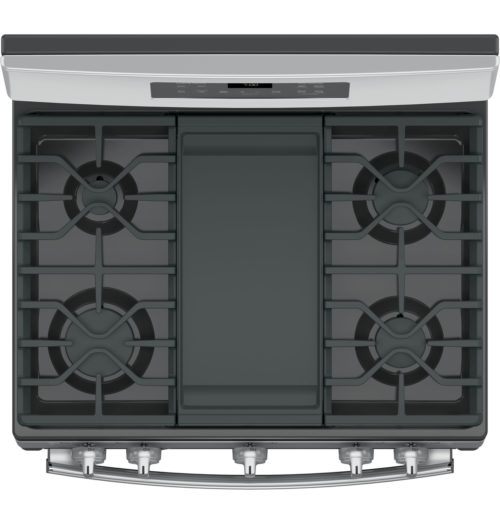 There’s an extra convenience in the burners too. Besides the easy breakfast option of the middle burner, the front left burner is a ‘Power Boil’ burner.

What the heck’s a Power Boil burner? More power, more speed, that’s what. Whereas the standard burner on the GE JGB700SEJSS, on the bottom right, pumps out 10,000 BTUs, the Power Boil burner gives you an additional 8,000. 18,000 BTUs means rapid boiling options for everything from beverages to boiled eggs to pasta water to a rapid scramble and beyond. Simple, easy, effective, and taking some of the hassle out of cooking.

There’s another standard burner on the back left, cooking with 9,500 BTUs, for a kind of lower medium cooking option. While the back right burner – diagonally and philosophically opposite to the Power Boil – is a simmer burner, using just 5,000 BTUs, so you can keep dishes warm without overcooking them. It’s also perfect for reducing sauces and thickening syrups. Two standard burners, one supercharged rapid boiler and a simmer burner, plus the breakfast griddle burner in the middle. That’s the ethos of the GE JGB700SEJSS in a nutshell. It gives you everything you could want, without overcomplicating your life or turning you off the idea of trying.

The burner knobs, incidentally, aren’t over-heavy, but they do require a definitive push and turn to activate. That means you’ll be unlikely to forget whether or not you’ve turned the burners on or off – muscle memory will help you. Likewise, there are clear, unambiguous indicator lights to tell you which burners are on at any given time. There’s just enough high-tech to be actively useful, without confusing the cook.

The oven itself is for the most part a standard oven. It doesn’t contain a jet engine or the secrets of life. But GE has drawn a line between the genuinely helpful additions an oven can have, and those which are merely flounces or fripperies. As such, the oven has a convection fan, to speed up your cooking and baking in a relatively simple way. Convection cooking is not by any means an overly complex art requiring the learning of new skills. It’s just a go-faster function, and many recipe books will include times for both standard and convection ovens. Simply use the convection timings and get on with your life.

Similarly, the oven has a self-cleaning feature. The only way to be nonplussed or unimpressed by that is to never have spent any time in your life cleaning an oven. It can be a tedious, backbreaking affair of scrubbing and the kind of chemicals that get you high and melt your eyeballs. With a self-cleaning oven, GE aims to remove any and all barriers between you and cooking at home, from first thing in the morning to last thing at night.

In the GE JGB700SEJSS, GE is not trying to reinvent the wheel. It’s not trying to blind you with science or wow you with design. It has just enough of both to be welcoming, to invite you to use your oven more than you’ve ever done before. It has a range of burners, clearly marked to keep things simple. It has an oven with a convection fan to help you get great results fast, and it has a self-cleaning feature to take the hassle out of cooking.

It’s not rocket science. It’s kitchen science, with a friendly vibe and a college degree in helpfulness.  It’s everything you could want or need, stripped back and simplified to help you engage.